Rock–paper–scissors is a popular hand game. However, some nerds may prefer playing this game on their computer rather than actually shaking their hands. 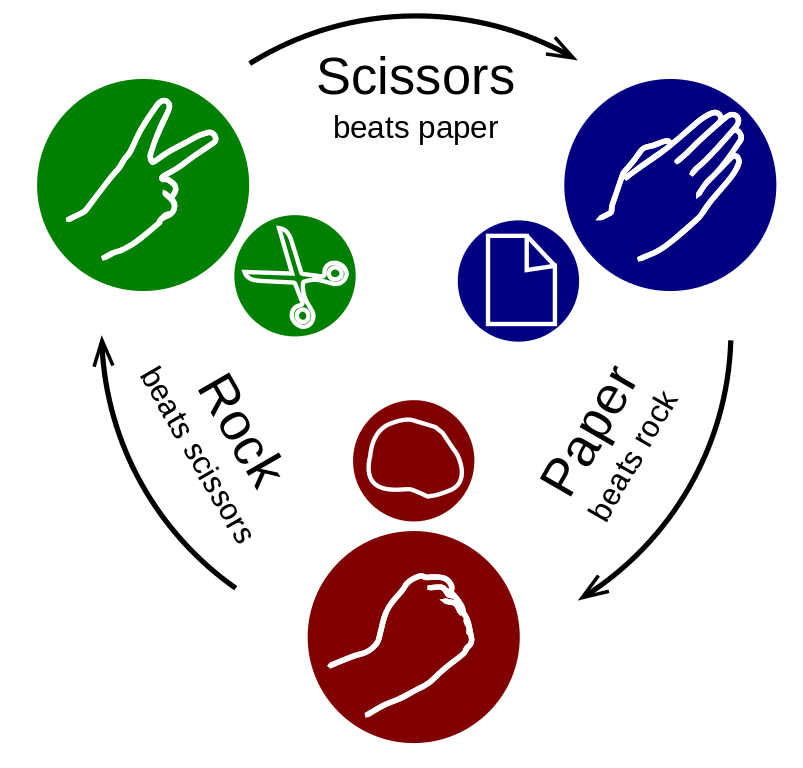 We can write this game in less than 10 lines of code in the Julia programming language. This implementation will offer the opportunity to have a closer look to one of Julia’s main features: multiple dispatch.

That’s all. Nine lines of code, as promised. This is considerably shorter, simpler, and easier to understand than any other implementation in all languages over at Rosetta Code.

defines Shape as an abstract type. This will be the parent of the concrete types Rock, Paper and Scissors that represent the characters of the game. To be fair, it’s not necessary to create the Shape abstract type (so they would be eight lines in total!), but this allows us to define methods for the play function only with Shape subtypes as arguments, so that one can extended that function to other games without clashing with our definitions.

Here the concrete shapes are defined as composite types, subtypes of Shape (indicated by the <: sign). They don’t actually contain anything, but that’s OK, we just want to define the elements of the game as types in order to take advantage of Julia’s type system.

These are the basic rules of the game. We’ve defined three methods for the play function, which return a string indicating the winning shape. The two arguments of these methods are two shapes, for instance Rock and Scissors. If you look carefully to the definitions, we omitted the names of the arguments (they should come right before the :: in the list of elements), because they’re not used in the body of the function and we don’t need them. Instead, what’s important here is the type of both arguments.

With this single line we’ve defined the tie for all shapes. The arguments of this method are two equal shapes, they have the same type T subtype of Shape, whatever T is. T doesn’t even need to be defined at this point, because in Julia, dispatch is dynamic on all arguments (in in C++/Java you can achieve dynamic dispatch on first argument, but it’ll be static for the others).

So far we’ve seen the rules, for example, for the arguments Paper and Rock, in this order, but there is no rule for the same arguments in the reversed order. Here comes the magic:

Recall that multiple dispatch is the ability to define function behavior across many combinations of argument types. What’s crucial here is that the type of all arguments matters, not just the first one as in object-oriented programming languages. If none of the previous methods applies (Paper-Rock, Paper-Scissors, Rock-Scissors and all the combinations of arguments with equal types), this method will be used, which simply swaps the two arguments so that one of the above methods can be called.

Besides letting us save four definitions, multiple dispatch makes the program very efficient. The appropriate method is quickly selected based on the type of all the arguments. Without multiple dispatch we’d have to write explicitly a sequence of at least seven if ... elseif ... end, but branching comes at a performance cost. Of course this isn’t a big deal in a simple game like this, but think about your CPU-intensive application.

Now that we’ve implemented the game we can play it in the Julia REPL:

There was no explicit method for the combination of arguments Rock-Paper, but the commutative rule has been used here, as confirmed by the @which macro.

We can also add some randomness to the game. The rand function can pick up a random element from a given collection. Luckily, the subtypes function returns the array with all the subtypes of the given abstract type:

Here it is proposed an extension of the game to a fourth shape, the well, with the following rules:

This is a non-zero-sum game, but this isn’t a concern for us.

We can extend the above Julia implementation to include the well.

We accomplished the extension with just four additional lines, one to define the new type and three for the new game rules. We don’t need to redefine the tie or the commutativity methods, thanks to Julia’s dynamic type system.

Here you can see that multiple dispatch let us extend the game very easily, saving us four more definitions. Out of the total \(4 \times 4 = 16\) necessary definitions we had just \(8\) definitions, without giving up commutativity.

Let’s see it in action in the REPL:

The main goal of this post is to show how multiple dispatch enables writing generic and extensible code in a few lines. Mason Protter showed that we can get a fancier and more informative output by writing some more code:

Now we can play in the REPL with the single playrand() command: